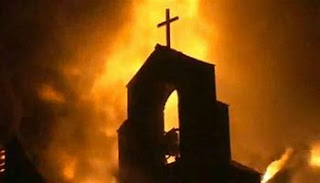 A Louisiana Sheriff Deputy's son, no less, Holden Matthews, 21, has torched three black churches, and says he was influenced by "black metal" music. The three churches were in the heart of south central Louisiana's Cajun and Creole country and were burned in the span of 10 days. Apparently they don't know this wacko's motive but you might look to his upbringing, especially in this state. It also has a very high rate of gun violence.

And Matthews isn't the brightest, leaving a 2-gallon gas can at the scene and was witnessed leaving the handiwork driving his truck. I guess the man doesn't like Baptists since all three churches were of that denomination. That, of course, plus the fact that he hates blacks. Matthews was active in social media...


"On a Facebook page that appears to belong to Matthews, he was active in black metal and pagan pages. Although both scenes are predominately apolitical, both have large neo-Nazi fanbases. Matthews commented on two memes about Varg Vikernes, a far-right (and self-described former neo-Nazi) metal musician who served 15 years in prison for burning churches in Norway and killing a fellow metal musician."

Which brings up the connection today between so much violence in the world and social media. This country is so engrossed with protecting 1st Amendment rights that one often wonders just where those limits should be set. In other words, is it time to evaluate the 1st Amendment and impose guidelines on when a person has gone too far? Like advocating hate and violence against others. Unfortunately, the current Congress doesn't have the balls to address this.
at April 12, 2019