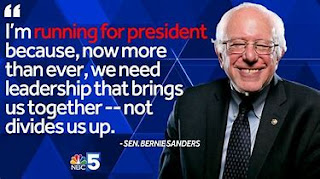 Early on Bernie Sanders is taking advantage of his record-breaking grassroots army, picking out volunteers and hiring people with the right experience. Campaign aides report that more than 1 million people have signed up to volunteer for his campaign, and they will be asked to host house parties around the country again. In an email to supporters he will say...


"we need to create an unprecedented grassroots political movement."

Sounds familiar, as does a lot of Bernie's rhetoric. But stop! is this the kind of individual we need in the White House, one we know exactly where he stands, with pretty much no change in the issues of his platform since he first ran for Senator in Vermont? NPR has done a good job of illustrating them here. If you like the issues, get on Bernie's bandwagon. We're all keeping our eyes on the polls because that is just as important to Bernie's campaign as money.
at April 04, 2019