NRA has always been problem getting gun control done 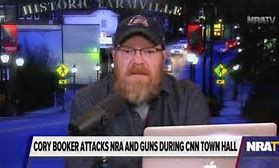 Here's a recent article headline from The Hill...


"Gun control advocate: 'Surprised' at how many gun owners agree gun ownership standards should be raised"

I'm not, and when I see a header like this there is no doubt in my mind that, if gun owners want reasonable gun control, it is definitely the National Rifle Assn. (NRA) that is standing in its way and has for many, many years. Wayne LaPierre, the NRA's head gun nut refuses to listen to any legislation that limits access to guns. Even reasonable background checks, the banning of assault rifles which is the weapon of choice in most all gun massacres.

There are three people in this country today the American public could do without: Donald Trump, Mitch McConnell and Wayne LaPierre. All three fly in the face of anything that is good for this country, and seem hell-bent on dragging the United States to the bottom of the barrel. Each has his own agenda, a combination of twisted ideas and philosophies, all of which point back to the pariah in question. What this nation needs is a clean sweep of this trash.
at April 04, 2019