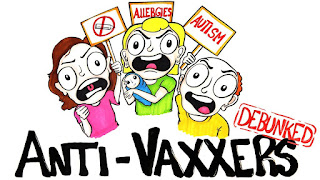 Here's the actual headline from CNN: "US measles cases at second highest since disease was eliminated in 2000." This is unheard of for the leading industrialized nation in the world. And it is all thanks to the anti-vaxxers who refuse to vaccinate. It's like these parents said, 'we're not killing enough of our kids with guns, let's kill 'em now with measles.'


"A total of 387 individual cases of measles have been confirmed in 15 states from January 1 to March 28, according to the US Centers for Disease Control and Prevention. This is the second-greatest number of cases reported in the United States since measles was declared eliminated in 2000."


"Measles is a highly contagious disease caused by a virus that can spread through the air when an infected person coughs or sneezes, or if a person comes into direct contact or shares germs by touching the same objects or surfaces."

Which means the anti-vaxxers are not only sending their kids off to school today to learn, but also to spread their disease around. Pathetic!