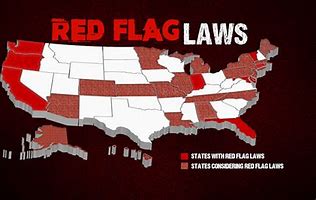 Here's the definition of a Second Amendment Sanctuary...

In other words, gun sanctuary cities are those where gun nut law enforcement has chosen to break the law and not protect its citizens from gun violence. Kinda like anti-vaxxers who have decided to break social traditions that protect the health of this country. Salon reports...


"In some cases, county sheriffs have publicly said they will not enforce the new laws"

This has happened in at least six states: Nevada, New Mexico, Washington, Colorado, Oregon, and Illinois. Sounds like sedition to me, an outright act of huge illegal proportions by law enforcement that is bound by the Constitution to uphold the laws of this country. And it's gaining momentum throughout the U.S. Although inspired by efforts to establish immigration and marijuana sanctuaries, it is the new Red Flag Laws that move these groups today...


"A red flag law is a gun violence prevention law that permits police or family members to petition a state court to order the temporary removal of firearms from a person who may present a danger to others or themselves."

Now that seems reasonable enough to most people who prefer to keep their lives intact rather than die from gun violence. Monument, Colorado is one of those bastions of gun nuts who favor their weapons over the life of the innocent citizens they are supposed to protect. The Board of Trustees voted unanimously to proclaim Monument as a “Second Amendment Preservation Town. Police Chief Jacob Shirk doesn't like the red flag bill, probably won't enforce it.

Brookline, Mass. frowns on its firearm licensing policies, and is attempting to take its case all the way to the Supreme Court. These 2nd Amendment morons are going to go too far soon that the American public will tire of the gun violence and vote to repeal the 2nd Amendment. This all ties in with the spate of loose gun laws across the country that allow these cowboys and cowgirls to take their guns anywhere they want to. This sloppy gun control just puts more guns in the hands of the bad guys.
at April 10, 2019