NRA SAYS: Put guns in the hands of convicted felons 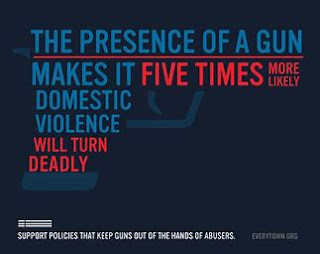 This slimy pile of gun nuts continues its march toward annihilating the American public with its gun violence policies. It's a matter of federal law that someone convicted of  "physically abusing his spouse, ex-spouse, live-in lover, or co-parent" cannot own a gun. But if it's a date, stalking him or her, after they break up, the other is fair game. The NRA is well aware of the latter but still fights for the right of the perpetrator to keep or buy his or her gun.

Well, here are the numbers...

So the NRA was no doubt forced into the legislation that bars abusive husbands from having guns, but they fight the above scenario. It is more clear evidence that Wayne LaPierre, head NRA gun nut, and a certain portion of his membership value their weapons over human life, even someone close to them. Until this sick mentality can be driven out of this country, children and innocent citizens will continue to die by gun violence in schools and on the streets.