Why do Republicans hate Social Security? 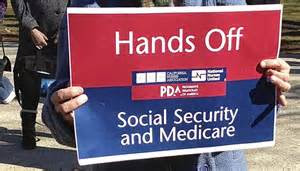 Because the man who launched it was a Democrat, Franklin Delano Roosevelt? Mitch McConnell type thinking. Because they can't stand giving anything away; actually the average couple will pay in about two-thirds of what they take out. So it isn't all welfare. Because most of the Republicans who are against Social Security are wealthy, therefore don't care what happens to the poor slobs like us? I think we've got it. Although I know several conservatives who are not affluent and are still of the Republican persuasion; all I can say is that I pity them.

But this post is about the people in Congress that are trying to gut Social Security by raising the retirement age and reducing benefits as much as a third. Now I cannot speak with authority on what the minimum age for benefits should be, but I can see that reducing benefits could wreak havoc on those households that depend entirely on this monthly check. Rep. Sam Johnson (R-Texas), the chair for the House Ways and Means Social Security subcommittee, is the one responsible for the legislation. Now here's a shocker, his net worth is $48,501.

Fortunately, in his case, as a House representative, and only with one term, he will receive $174,000 a year for the rest of his life when he retires. Now why would he worry about Social Security? But you would think someone with that kind of net worth would sympathize with others in the same category. Unless...there are other assets hidden somewhere like the Caymans. Johnson's Act would keep Social Security going for 75 years, but would "...include a $2 trillion decrease in revenue into the program and a $13.9 trillion decrease in benefits."

Of course, there would be no increase in taxes, like maybe on the wealthy, and some other loopholes for the rich, with a GOP Congress and a Republican in the White House. Raising tax on the top 1% to 40% would yield $157 billion in one year; to 45%, $276 billion. This group is the one most able to afford it but greed on the part of the GOP has stifled any action for years. I honestly believe that with Bernie Sanders in the White House, even with a Republican Congress, he would have gotten this tax passed. He'd do it with you and me in an all-out grass roots effort.