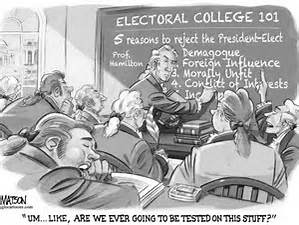 It's happened twice now, during the last three elections, the popular vote winner loses the election. It was made official yesterday by an antiquated system called the Electoral College. Donald Trump with 306 votes, Hillary Clinton with 232--hardly a landslide--Clinton ending up with more than 2.5 million popular votes than Trump. The nation did not elect Donald Trump, the college did. And that is what is wrong. NBC reports on efforts, post-election...


"A handful of Democrats and even a few Republican electors have embarked on an unusual effort to deny Trump the victory — or at the very least, raise the specter of changing the election."


"Electors in three states have gone to court seeking the chance to vote their mind; another resigned to avoid the vote altogether. One Republican elector in Texas has publicly said he will not vote for Trump, although his state voted overwhelmingly for the GOP candidate."

Here's a quote from The Nation, a leading Progressive publication...


"The Electoral College is an abomination: an antidemocratic relic of the unconscionable compromises made during America’s founding that should never have been allowed to linger into the 21st century."

As an example of the inadequacy of the Electoral College, Donald Trump took Michigan with less than 11,000 votes out of a total of 4.8 million cast, .0023%. Supporters of the College claim it protects the smaller states from being overrun by the larger ones. When, in fact, five of the 10 smallest states, Vermont, Delaware, New Hampshire, Rhode Island, and Maine, as well as the District of Columbia had Clinton leading Trump. As I understand it, this is one of the major reasons the Founding Fathers concocted this nuisance.

And here is something that is almost as frightening as Donald Trump being elected President. The Nation surmises "that GOP strategists will again try to implement schemes that would distribute electoral votes based on the popular vote in congressional districts, which would allow partisans to gerrymander both the US House and the Electoral College." Because of the incompetency of the Democratic Nat'l Committee, led by disgraced Debbie Wasserman Schultz, the GOP already leads in state legislatures and governor's offices.

The bipartisan National Popular Vote initiative is making some headway with a compact that says the state electors must cast their votes with the popular vote. Ten states have signed up totaling 165 votes, but the compact can only take effect when more than 270 is reached. Barbara Boxer introduced a constitutional amendment to abolish the Electoral College, but with a Republican Congress, and the GOP already having won the election, its likelihood of getting anywhere is doubtful. In a final note, The Nation commented...

"...something must be done to address the structural absurdity of elections that allow losers to become presidents."

And that could not be more appropriate.
at December 21, 2016