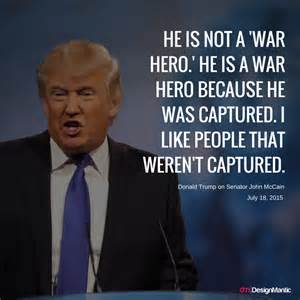 This is in reference to John McCain, who was captured in Vietnam, and at the time of the statement, not a Donald Trump supporter. The implication was that McCain was not a war hero because he was captured. Now, I am not a John McCain fan, but he has managed to turn his wartime abduction into a long political career.
at December 24, 2016