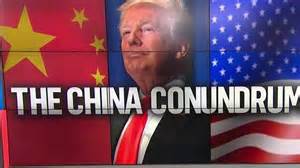 Okay, Donald Trump broke protocol with mainland China by even taking the phone call from Taiwan's President, Tsai Ing-wen--if, in fact, she did call--something that quickly came to the attention of China's President, Xi Jinping. No repercussions yet, but the political experts believe China is laying low to try and figure out the new U.S. President-elect. Good luck on that one. But most feel they will make their move and it might not be pleasing.

But what should be noted here is the fact that even weeks before this mysterious call, a "businesswoman claiming to be associated with Trump's conglomerate made inquiries about a major investment in building luxury hotels as part of the island’s new airport development." The woman reported as Ms. Chen arrived from the U.S. to meet...


"the mayor of Taoyuan, Cheng Wen-tsan, one of the senior politicians involved in the Aerotropolis project, a large urban development being planned around the renovation of Taiwan’s main airport, Taoyuan International."

The above in September, and then in November, Nicola Smith of the Guardian reports...


..."a Chen Si-Ting, a US citizen of Taiwanese origin, had given a speech at a Friends of Trump banquet in central Taipei. Chen claimed at the event on 1 November that Trump’s company was interested in investing in Taiwan and that his son, Eric, would visit the island before the end of the year."

Coincidence, or strategic planning by the Trump family? Of course the man isn't yet President, his promise to leave the Trump organization behind was after he became President, but this looks like a clear use of the American Presidency, even significantly breaking diplomatic protocol to do it, to further Donald Trump business interests. Separately...


"...Anne-Marie Donoghue, who describes herself as the global head of transient sales and Asia at Trump Hotels, was confirmed to have been in Taiwan in October."

C'mon now, where are all the Republicans asking for an investigation of this possible egregious conflict of interest?
at December 05, 2016