Why did Putin want Donald Trump in the White House? 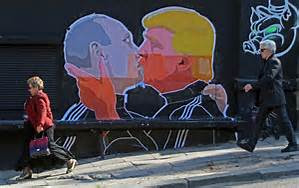 Donald Trump is supposed to be such a savvy businessman, wouldn't you expect that to translate into at least a crafty politician? Vladimir Putin doesn't think so. Steve Benen of MSNBC says Putin feels with Trump in the White House the United States will look "...ridiculous, having an unprepared and unqualified television personality leading a global superpower." He thinks it will be easier for Russia to exploit America’s "self-inflicted wound." WOW! We knew we had a psychopathic clown going to Washington, but this observation, if true, is really frightening.

NBC News reported recently that "...17 U.S. intelligence agencies agree that Vladimir Putin’s government was responsible for the cyber-attacks." Apparently, this has been widely accepted to mean that Russia did interfere in the U.S. 2016 election, some even saying that Putin, himself, led the effort. In contrast, the Trump administration is blaming it on China or saying it didn't even happen, according to MSNBC. And even more conjecture in what Russia's Putin might be thinking...


“You obviously can’t count on the United States to be a credible global leader anymore; just look at who the Americans chose as their president.”

WOW again, but true in the sense that the deranged American public elected this lunatic.

And then Benen gets to the financial side of the argument. Barack Obama could be depended on to slap sanctions on Russia when they became overly hostile and aggressive. It is possible, maybe even likely, that Donald Trump will lift them for his old Russian buddy. White House chief of staff Reince Priebus refused to confirm one way or the other. Okay, we're talking about Russia, but what can other countries be thinking, especially any that have an ax to grind with the U.S. This country is on the precipice of disaster and Donald Trump is the one that can push it off.
at December 20, 2016