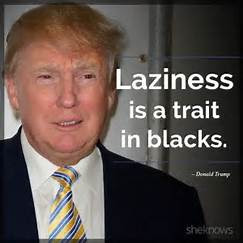 The United States is a racist and sexist country, has been, is, and, perhaps, always will be. Bigotry has lain almost hidden for several years, starting in the late 1960s, after civil rights laws were passed. Before that I lived in the South and it was rampant, right out in the open for all to see. And it was accepted. Tragically by both whites and blacks. I grew up in it but never accepted it, thus, leaving that part of the country for more tolerant places. They exist on the outside, but deep down there is always that feeling, at least for some, that you are better than someone else.

We saw racism rear its ugly head here in Arizona with the state's immigration bill, SB1070, which was eventually stripped of its major parts and no longer has any influence. Arizona former disgraced Sheriff, Joe Arpaio, tried his best to continue the harassment of Mexican illegals but was finally stopped by the Federal government, was then voted out of office, and is the focus of several lawsuits. The "N" word is less prevalent than it used to be, but a recent comment on my blog proves it is still in use. It was in response to a post of how Trump's election might hurt the country...


What a joke, the market is breaking records every day since we elected a real President, your buckwheat nigger "president" was and is the biggest failure of all time

I also did another post earlier on how North Carolina has maintained a steady parade of racist laws:
"North Carolina continues its racist mandate." The state seems hell-bent on proving that racism is not dead, but is thriving in that state. Immediately following Donald Trump's election the Ku Klux Klan was displaying its robes for all to see, crying out its support for Trump. Confederate flags were being flown everywhere, an accepted symbol today for racism. Former KKK leader, David Duke told Time magazine, "He and Donald Trump have the same message." CNN has this observation...


"At first glance, comparing some Trump supporters to ex-Confederates may seem absurd, even insulting. But historians say both groups developed an uncanny ability to obscure the role race played in transformative events and to persuade millions of Americans to go along with the charade."


"Trump's victory may mark the resurgence of the Old South in another more sinister way: The return of 'racial amnesia.'"