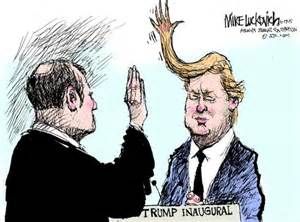 As a passionate Progressive, I would still welcome a loophole in the Donald Trump presidency, but until that happens, the left must look ahead to what we have to work with. Right now the Democrats are in something of a shambles, with Hillary Clinton no longer able to lead the Party and a new leader not yet even emerging. My choice, of course, is Bernie Sanders, and also the choice of most other Progressives, but the legions of politicians has grown quiet, until we are able to swallow the inauguration of Donald John Trump. That will be hard to do for many.

For the new DC chairman, the early choice, Keith Ellison, Minnesota congressman and ally of Bernie Sanders, has run into trouble. Politico reports...


"On the heels of Rep. Debbie Wasserman Schultz’s troubled tenure as DNC chief, the issue of whether Ellison will commit full-time to the job poses a threat to his candidacy..."

My guess is that Wasserman-Schultz had the time but she just wasn't competent enough for the job. CNN says that, "...2017 will be a year for the history books." We knew that the day the Electoral College met and made its grim decision. That quiet you hear out there across the country are those voters of sound mind who didn't vote for Trump, and who are holding their breath in fear of the future. Most individuals are capable of handling most challenges sent their way, but the worst thing to confront is the unknown. Donald Trump is the epitome of the unknown.

With GOP control of both Houses of Congress, and a Republican in the White House, the outlook is fairly dim for the left, particularly for Progressives. Democrats have steadily moved to the center, which is one goo reason the Party is losing so many elections. Republicans have staunchly maintained their conservative positions on issues, establishing an identity that supporters can follow. The Dems are fractured with no single ideology to look up to, nor any individual to carry the torch. Until they find that, there could be even more Donald Trumps. God forbid.