Drop the College and drop the 2nd Amendment 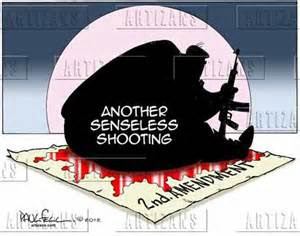 Never before have I seen a case made so eloquent for ridding ourselves of a "relic" bestowed on us by the Founding Fathers. We have a few but this is one that happens to be in the spotlight now as the bungled finish of the 2016 Presidential election becomes evident. For the second time in 16 years, the out-of-date Electoral College has given the White House to the person with the least popular vote. And this year it is significant: Hillary Clinton has scored over 2.2 million more votes than Donald Trump. John Nichols does an excellent job of making his case in The Nation...


"The Electoral College is an abomination: an antidemocratic relic of the unconscionable compromises made during America’s founding that should never have been allowed to linger into the 21st century."


The 2nd Amendment is an abomination: an antidemocratic relic of the unconscionable compromises made during America’s founding that should never have been allowed to linger into the 21st century.

I hear the gun nuts coming out from under their rocks now but even the "antidemocratic" portion, above, can be defended. It is against my democracy to have to be in a public place with some guy or gal who feels it necessary to walk around with an assault rifle on their shoulder, a weapon that belongs only in law enforcement and the military. Yes, they have a right, but that should extend no further than their front door. But even the right to defend yourself in the home shouldn't include assault rifles. Individual rights go just so far and can be limited, as agreed by the Supreme Court.

The fight over guns will go on until enough of the "right" people are killed, and by that I mean those most verbal over gun rights that preclude any responsible  control at all. And by the lunacy of some of their rhetoric, I wonder if even then.

More on the Electoral College later.
at December 09, 2016