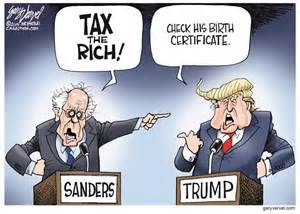 In an interview with Chris Hayes of MSNBC, Bernie Sanders was his usual self in describing President-elect Donald Trump's Cabinet picks of billionaires and millionaires. Hayes showed a clip of Trump's rhetoric criticizing Wall Street, saying they wouldn't get away with anything. Well, they got away with the "golden goose" in the Cabinet choices he has made so far. See Matt Rocheleau's line up. Rocheleau comments:

And this is just half of the Cabinet so far. Bernie points out that, not only is Trump not criticizing Wall Street, he is appointing its insiders to help him run the country. The Bern deemed it sheer hypocrisy and laughable in the following video...


Chris Hayes talks about how happy Wall Street must be with only billionaires and millionaires so far to determine the future of the middle class. I hope those uneducated redneck supporters of Donald Trump are looking at this and realize what a momentous mistake they have made. Something tells me these people may never realize just how bad they are being screwed. There are more Cabinet members to be chosen but there is no reason to think it will change.

As Bernie Sanders said, we have elected a fraud and a phony.