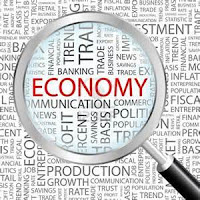 President-elect Donald Trump said that Barack Obama has been very cooperative with him and his transition team, scary as it is, in turning over a government that was rescued from George W. Bush's calamitous eight years as President. Bush almost put the country in the toilet, but Obama has brought things back to a stability that can be built on. All the time with a GOP Congress that resisted virtually every move the President made.

Unemployment, at the lowest level since 2007, home prices at all time highs, with the middle class getting a pay raise. These words from CNN Money where they quote Paul Ashworth, chief economist at Capital Economics, saying, "The 'Obama economy' deserves a 'B or B+' grade." It's not an "A" but many think it should be, and the the President, in defense of his administration commented:


"Anyone claiming that America's economy is in decline is peddling fiction."

Wages are stagnant, have been for some time, not responding to a cycle where they usually rise when unemployment goes down. One of the reasons is, rather than pay higher wages, companies are going overseas for cheaper labor. But with no inflation, workers at least keep a status-quo, which could change soon if the feds up the interest rates. What matters is that the economy is going in the right direction under Pres. Obama. We'll see where it's going a year from now.
at December 03, 2016