Minimum wage increases to depend on local governments 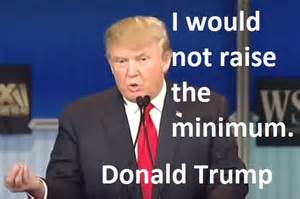 Twenty-one states and twenty-two cities are increasing the minimum wage while Donald Trump's selected Secretary of Labor, Andrew Puzder, is a longtime critic of the concept. He's the guy who heads up fast food chains, Hardee's and Carl's Jr., so those of you out there who are minimum wage increase advocates might want to avoid these eateries. Try McDonalds or Burger King. In the case of one state, Arizona, where I live, they are fighting the minimum wage bill that passed in November, blaming it on the harm it will do to the state's health care system, which is pure bullshit.

The Arizona Republic claims that is only a smoke screen to cover the fact that businesses just don't want the minimum wage increased. I have lived in Arizona for over 20 years and this state has always been the backward state of the Union, all because it is and has been under Republican control for years. But that may be changing. In the state increases, some are piddly, like five or ten cents an hour, with others higher. Arizona voted $10 and hour, the biggest of all at 24%. In my judgment, that is a reaction by Progressives, finally coming out of the woodwork, to the long GOP control here.


"In the absence of action from Congress in terms of raising the federal minimum wage, which has remained at $7.25 since 2009, states and localities have taken matters into their own hands."

The restaurant industry is also a critic of raising the minimum wage, which is allowed to pay a minimum of $2.13 an hour, if the salary combined with tips equals the federal minimum wage of $7.25. Anyone who doesn't think that is poverty wage--and apparently Andrew Puzder doesn't and if he does, he simply doesn't care--is completely without compassion. But then, that would describe the majority of the Republican Party, particularly its new leader, Donald Trump. My guess is, though, some of these unfortunates even voted for Trump with hope that will never be realized.
at December 28, 2016