Just another example Donald Trump not serious about his presidency 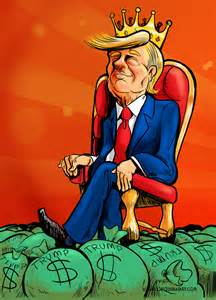 The new President-elect is skipping intelligence briefings, blowing them off as if the security of the United States is not a priority to him. And maybe it isn't, as he continues to plan new Trump hotels in Taiwan; Russia is probably next. I've said from the beginning of Donald Trump's rise in the polls that he was doing it for one thing...Donald Trump. President Obama has ordered his daily intelligence to be given to Trump and Mike Pence to keep them abreast of the current status of our security and what the global situation is. Trump has schluffed off most, attending at best one a week.

But, then, why not have an uninformed President; all of his supporters were uninformed. He's not required to attend these briefings but Presidents in the past have welcomed the opportunity to have a heads-up on where the nation and world stands before taking office. Not Donald Trump. And if he does have his mind on things other than the US, like where his next hotel will go, well, a lot of us told you so. This hasn’t gone unnoticed, according to MSNBC...


"Sens. Dianne Feinstein (D-Calif.) and Ben Cardin (D-Md.), the ranking members on the Senate Intelligence and Foreign Relations Committees, respectively, noted they find it 'particularly troubling' that the president-elect 'has mostly declined to take the daily intelligence briefing' – breaking with what other presidents-elect have done for decades."

Former CIA Director Leon Panetta is concerned with the situation and when you consider Donald Trump's lack of experience in governing--zilch/nada--it should send up warning signs to everyone, especially those in the Pentagon, that this president might be AOL when those important decisions need to be made. Of course, the man has never been presidential and never will. Here's another MSNBC statement worth quoting...

".. it’s hard not to feel uncomfortable with these circumstances. The least experienced, least knowledgeable presidential candidate in American history – prone to believe weird conspiracy theories and disregard facts he finds inconvenient – is preparing to take office soon, and at this point, he seems passively indifferent towards security information."

The whole thing is alarming but what is even more alarming is that these uneducated rednecks that elected him knew he was not presidential material before they voted.
at December 10, 2016