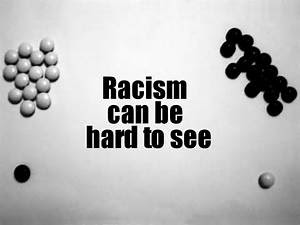 After growing up in the South I left because I couldn't tolerate the segregation beliefs and policies. What was more perplexing than the act of unabated racism was the fact that these people were sure that they were right. And many of them still are, not just in the South, but all over this country. The state of Arizona has taken a different path in the last few years, their racism directed toward Hispanics. Former disgraced Arizona Sheriff, Joe Arpaio, tried his best to harass all of the Latino's out of the state but failed and now will hopefully go to jail for it.

They say the art of racism is not inherited, it is learned. It is not taught at any school in lower or higher education, as far as I know, but I have to qualify that. Not outwardly but inwardly, not the direct approach but the more covert approach. It is, however, definitely there, as far as the masses and as far as the education. To illustrate, here is a comment from one of my recent blogs, "Lowlife Donald Trump supporter replies to my blog:"


What a joke,the market is breaking records every day since we elected a real President, your buckwheat nigger "president" was and is the biggest failure of all time

This is just one result from the action of more lowlife like the out-going Governor of North Carolina, Pat MCrory, who brought his Republican caucus together to pass bills that severely restrict what the incoming Governor, Democrat Roy Cooper, can do. One thing is the "elevation of a distinguished African American jurist, Mike Morgan, to the state's Supreme Court." CNN says it is to, "reconfigure the state's court system to fend off challenges to legislators' power." In effect, take most of the control away from the executive branch before Cooper comes in.

Morgan's appointment would give the court a Democratic majority but this is all icing on the cake. This state government is exploding in a continued effort to deny the vote to African Americans. A "...federal court overturned the legislature's "racial gerrymander" in 28 districts, requiring new district lines and a special election in 2017; the US Supreme Court is reviewing that case now." There's more...


"This past July, the US Court of Appeals for the 4th District ruled in North Carolina NAACP v. McCrory that the extremists in the General Assembly had "targeted African Americans with almost surgical precision," and overturned the state's 2013 voter suppression bill."

Still think my earlier proposal should be considered: Put all racists in a concentration camp.