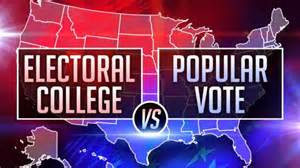 No losing presidential candidate in history has received as many popular votes as did Hillary Clinton against Donald Trump, the president-elect. 2.9 million, up 400,000 since the last count. The election is history but the story is slowly changing from surprise Trump victory to why he won and what is wrong with the system. What's wrong with the system is the Electoral College that put Trump in the White House and how it transcends the power of the people. I railed on this in an earlier post, "Dump the Electoral Party...NOW" that shows the inadequacy of the College.

What bothers me from a CNN article is a statement by Trump, "...that he would have won the popular vote, too, if that had been his focus. Here's his actual comment...


"I would have done even better in the election, if that is possible, if the winner was based on popular vote -- but would campaign differently."

Is the implication here that Hillary Clinton campaigned strictly for the popular vote and let Donald Trump beat her in strategy?  If so, her years spent in politics were wasted. But I don't think that's all, nor is it the primary reason she lost. Clinton claims the Comey letter beat her but many think that was only minor to other faults. High on the list is message, or a real lack of, to reach the white working class, African Americans, young people and Hispanics. They needed more assurance from her and they didn't get it. Too much dependence on political data and not what the grassroots think.

Kellyanne Conway is a sharp political strategist and it is obvious that things started to turn Trump's way when she came on board. I remember her saying early on that her plan was just to let Trump be Trump. You can't argue with this now, and his continued diarrhea of the mouth collected enough uneducated rednecks to elect him. If I didn't know better, I would swear that the Trump campaign found that particular demographic in census data. I talk uneducated rednecks but to the other extreme, doctors respond to his promise to clean up insurance company paperwork.

We could look back some day and call this a "niche" election, and Donald Trump by running off at the mouth with his meandering, chaotic messages, was able to hit just enough people with slots they cared about to win the election. God help us!
at December 22, 2016