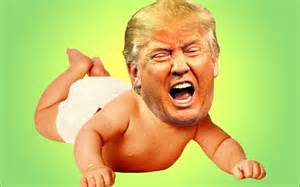 If Donald Trump was going to start World War III, and his mouth does have the capability of doing that, he most likely would announce it to the world on Twitter. This mentally challenged psychopath jumps on social media the moment anyone questions his...whatever he thinks he is. Okay, he is the President-elect, a mistake this country must now live with. Robert Reich, former secretary of labor in the Clinton administration now a professor of public policy at the University of California, Berkeley, gets on Trump's case about the effects from his whining criticism.

When Chuck Jones, local Indiana union leader who is President of United Steelworkers 1999, criticized Donald Trump because he falsely claimed he had saved 1,000 Carrier jobs, a blubbering Trump replied on Twitter...


"Chuck Jones, who is President of United Steelworkers 1999, has done a terrible job representing workers. No wonder companies flee country!"

You will remember the Boeing fiasco where Trump said out of the blue, "We want Boeing to make a lot of money but not that much money." That was a qualification to an earlier statement after the Boeing CEO lightly rebuked the President-elect for being against trade. After which Trump had tweeted...


"Boeing is building a brand new 747 Air Force One for future presidents, but costs are out of control, more than $4 billion. Cancel order!"

The outset was that Boeing took an immediate hit, then we found out that Boeing did not even have this $4 billion order.

Donald Trump has used the power of his position and big mouth to intimidate people in the real estate industry, and now he has brought this same level of sleaze to the White House. And with the GOP control of Congress featuring some of the biggest morons in politics, we're in for a tough four years. Or, once again, maybe not?
at December 11, 2016