The wealthy have taken away the American Dream 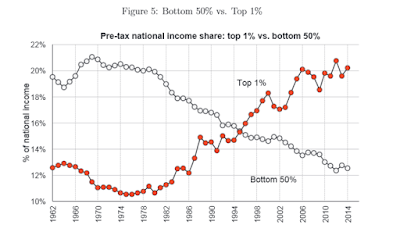 In the past, the American Dream provided that 90% of children could expect to earn more than their parents. In the last 50 years that has dropped to 50%. And that's not all, "...the bottom 50% of the American population earned an average of $16,000 in pre-tax income in 1980. That hasn't changed in over three decades." By comparison, the wealthy earned on average $428,000 in 1980, but today average $1.3 million a year. That's close to a 300% increase, where the have-nots remain stagnant. In other words, what Bernie Sanders was saying during his Presidential campaign was all true.

I have several friends who are Republicans, not necessarily have-nots, but certainly not even close to the top 1%, who don't seem to worry about this inequality. Some have commented that the rich should be rewarded because they worked for it but that brings up the question of how many were given their wealth...like Donald J. Trump. And then there's the suppression of those of us working stiffs by the corporations supported by the conservative GOP. Pew Research says from 1971 to 2015...


"...the nation’s aggregate household income has substantially shifted from middle-income to upper-income households, driven by the growing size of the upper-income tier and more rapid gains in income at the top."

CNN Money says that wages aren't going up for the bottom 50%, that inequality has grown and is on track to widen further. And the government, who is supposed to be the friend of the poor, isn't helping...

What makes all this worse is the fact that those in the top 1% not only laud their wealth over the lower echelons, but also use it to screw them further by buying elections. I'm talking about the Koch brothers.
at December 30, 2016