Donald Trump cult programmed to adore and follow him 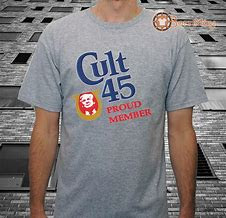 The Trump gang of loonies are definitely in a cult state. They are even proud of it, wanting all to know they support the Oval Office lunatic. When you Google the definition of cult there are three answers that come up. I chose this one...

a misplaced or excessive admiration for a particular person or thing.
"a cult of personality surrounding the leaders"

The key word here is "Misplaced," which indicates to me that these lost souls are either mentally retarded, or are in some way unable to think for themselves. An AlterNet commentary describes it this way...


"a lifestyle that can be adopted by anyone in any arena, at any scale, for any reason, in any culture, disguised as serving any goal. It is an attempt at a unified theory of what makes some humans particularly dangerous company, the product of 25 years of psycho-proctological study..."

To carry this further, it is simplistic people worshiping a simplistic cause delivered by a simplistic person. The leader, Donald Trump, is the biggest simpleton, followed by his gang of puppet minions who regularly eat up his bullshit, spewing it out to others who simply think they are...simpletons. I did a blog post recently on "What Trump supporters really look like," that asked this question...


"Have you ever tried to convince a Donald Trump follower that he is a tyrannical despot scraping the bottom of the political barrel?"

I have and they are as spacey as someone freaked out on crack. They look at me like I am the crazy one, which only compounds the fact that these people are living on another planet. But here's a fact from another of my posts, "Under 50% of Trump supporters like him. In  a June-July 2016 Pew survey," the findings were...


"Very few consider him well-informed or admirable. Only a minority expected that he would be willing to work with those he disagrees with, that he could unite the country, and that he is honest."

Good God! Trump followers think he is dishonest, yet they would follow this man off a cliff? It shows you the level of mentality that exists in at least parts of this country. And it is this kind of supporter that makes Donald Trump the scam artist he is. Referencing the White House maniac's 4th of July performance, here's an example from a July 10, 2019 headline: "Trump’s fake patriotism was sophomoric and insulting — so of course his supporters loved it."

This came from Salon's Lucian Truscott, in an opinion piece...


"Donald Trump’s Fourth of July speech was sophomoric. The fly-overs were anemic. The pairs of Bradley fighting vehicles and M1-A2 tanks were practically invisible. Everyone was soaked to the skin. They even played the hoary redneck anthem, 'I’m Proud to Be an American.'”

"But the crowd loved it."

Here's what Steven Hassan, author of a new book, “The Cult of Trump,” said...


“[What] really made me think of Trump as a cult was the way the groups who supported him were behaving, especially religious groups who believed that God had chosen Trump or was using Trump."

Hassan believes that not all Trump followers are actually cultists...


“but those who buy everything he says, who think he’s some kind of savior or a gift from God, whose loyalty is both unquestionable and irrational, I do think they’re behaving more or less like cult members.”

The question is not only how long will it take to get rid of Donald Trump, but also how long it will take to convince the T-rump cult that their adoration was so tragically misplaced.
at February 12, 2020