HEADLINE: After Bernie Sanders' landslide Nevada win, it's time for Democrats to unite behind him

If the Democratic establishment doesn't get behind Bernie Sanders soon, we are looking at four more years of Donald Trump. It is as if the old die-hards are saying, we'd rather see the Oval Office lunatic re-elected than give in to a Progressive. Are they jealous of the Bern's squeaky clean record, when most of them can't boast anything of the same. The leaders of the left, Chuck Schumer and Nancy Pelosi must start the ball rolling and do it now.

"No other Democrats can beat him at this point. But, the liberal establishment is still struggling to come to terms with Sanders’ inevitable nomination."

The word has been out for some time that Bernie "could attract left-leaning young white people, but was incapable of drawing in a diverse coalition." Not so. One of the candidate's major sources of support in Nevada was people of color. In fact...


"he received the majority of Latino votes. Entrance polls showed Sanders winning “men and women, whites and Latinos, voters 17-29, 30-44 and 45-65, those with college degrees and those without, liberal Democrats (by a lot) and moderate/conservatives (narrowly), union and non-union households.”


Here is a long, but very accurate description of the current status of the Democratic Primary...


"Michael Bloomberg fizzled completely in his big debut, and Democrats would be out of their minds to enrage every Sanders supporter by nominating a Republican billionaire. Joe Biden has lost badly in all of the first three contests, and it’s very clear that he can’t run an effective campaign. Elizabeth Warren’s campaign has nearly gone broke and in desperation she has resorted to relying on the Super PACs that she previously shunned. Pete Buttigieg can’t win voters of color or young people (and has accurately been described as sounding like 'a neural network trained on West Wing episodes')."

The media was so sure with Sanders' avalanche of votes that he was predicted to win with only 4% of the vote in. If this is any indication of the Bern's attraction, the skeptics can rest assured of his strength. Chris Matthews of MSNBC declared the primary "over." Jennifer Rubin of the Washington Post commented that it might be too late to do anything about him. This is the kind of language that pisses me off...why would we want to do anything about a winner? 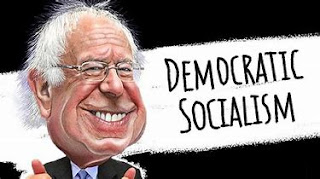 Look, Bernie has built a solid grassroots organization with known ability to bring in plenty of money; he raised a massive amount of $25 million in January alone. Just think what he can expect now with the Nevada win. And, RealClearPolitics currently shows Bernie Sanders ahead of Donald Trump 49.7% to 45.3. On the socialism issue, American do consider it unfavorable by 58% to 28%. However...


"Democrats and, more specifically, progressives view socialism favorably. Half of Democrats said so, while more than two-thirds of progressives did."

The Nevada strong win by Sanders will be considered by many Democrats as a disaster for the party, as it continues to lean farther to the left. But that's where the new Democratic Party is and these old hands had better get used to it. The Guardian exclaims...


"All in all, Nevada was an inspiring moment for American democracy, proof that ordinary working people of all races and incomes and genders can come together around a robust progressive agenda."