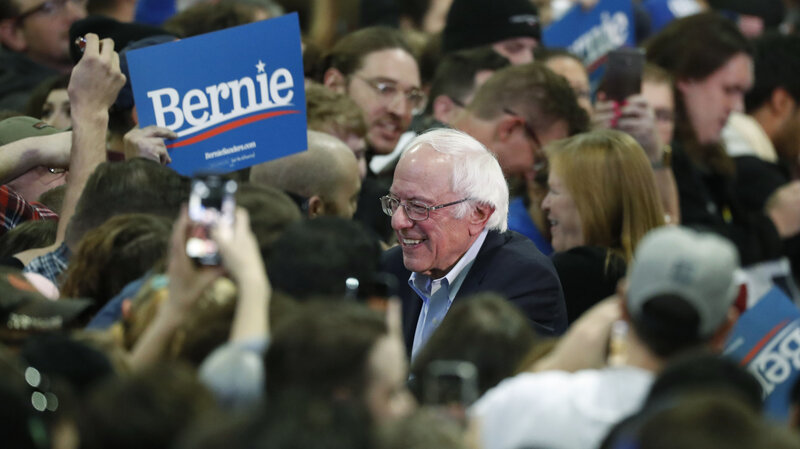 Bernie Sanders is up 9% in the polls to 31% nationally with Bloomberg second at 19%, then Biden 15%, Warren 12%, Klobuchar 9% and so on in the new NPR/PBS NewsHour/Marist poll. It is this poll that qualifies Bloomberg for the Nevada debates, which should determine his competition with Bernie going forward. There are two problems here: the Bern must increase his base to win this election; Bloomberg must address the accusations of women’s allegations of profane, sexist comments. READ MORE...

I am not talking about the Primary when it comes to Bernie, he can probably win that with his base due to the "fragmented" support of other candidates, according to Politico. Here's the scenario...


"While few expect that Sanders can carry more than a third of the vote in Nevada, nearly everyone believes that will be enough to win in a field where the moderate vote remains splintered. It is becoming a source of celebration for Sanders' supporters and an urgent problem for those who want to prevent him from claiming the nomination."

The Washington Post reports the Vermont Senator "is powered by a loyal base, but results in Iowa and New Hampshire show the movement has limits." Here's the thinking...


"A core base of young, liberal and working-class voters inspired by the Vermont senator's calls for a political revolution powered the self-described democratic socialist to an effective tie atop the Iowa caucuses and an outright win in this week's New Hampshire primary.

"Yet the early returns show that Sanders's loyal army represents a limited slice of the party, accounting for just over a quarter of the vote in each of the first two states. And one of the central premises of his campaign — that it is built to activate legions of new voters and spur record turnout among young people — has not been realized."

And that isn't good for the Bern. But the accusations of Bloomberg's conduct are also not good, and the two questions remain if Bernie can get his act together and widen his support outside the far-left and if Bloomberg can clear up this mess he has created. Something must happen, because, without these two, Democrats are way up the creek without the paddle. This would mean four more years of Donald Trump and a vast number of Americans don't want that, including some Republicans.

There is one more angle when it comes to Michael Bloomberg's candidacy, his close connection to Wall Street, which, both Bernie Sanders and Elizabeth Warren are fighting against. But CNN says "the billionaire is nonetheless vowing to crack down on the financial industry." Some might say that the self-made billionaire would be reluctant to go against his former cronies but look at the gun control issue. He is a leader with his Everytown for Gun Safety group.

And, that may not be exactly apples and apples, but it does show that Bloomberg is willing to buck the system and do the right thing. His attacks on Donald Trump so far have been right on and seem to be getting under the Oval Office lunatic's skin, which is just more heat to drive Trump over the edge. As I said earlier, these two (Bernie and Bloomberg) are a must for the Dems in November when it comes to beating the White House maniac. Nevada debate February 19, on NBC/MSNBC.
at February 19, 2020