Donald Trump: Supporters help make him the scam artist he is 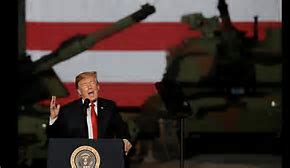 July 10, 2019: When I see a headline like the following: "Trump’s fake patriotism was sophomoric and insulting — so of course his supporters loved it," it makes me worry about the future of this country. It also cuts to the core of what is wrong with the United States; an uninformed gang of morons is running it with their elective power to put someone like Donald Trump in the White House. And, it looks like pictures of a large crowd at his July 4th speech are valid, even more distressing.

This man, no matter how low his morals or how many times and hour he is caught lying to the public, and his loyal followers, by the way, is still the head of the most powerful country in the world. And for whatever bizarre reason, maybe it is sheer luck, it hasn't yet happened. No, we haven't suffered a major catastrophe caused by this egotistical maniac, but according to Yale Psychiatrist, Brandy Lee, we are getting closer and closer to Trump armageddon.


"Donald Trump’s Fourth of July speech was sophomoric. The fly-overs were anemic. The pairs of Bradley fighting vehicles and M1-A2 tanks were practically invisible. Everyone was soaked to the skin. They even played the hoary redneck anthem, 'I’m Proud to Be an American.'”

"But the crowd loved it."

This conflagration of Trump-lovers was kept well away from their idol, with the VIP seats clustered around T-rump, close enough to blow smoke, well, you know where. These are the same VIP seats that, with such little demand, the Trump aides ended up giving the tickets to anyone who would take them. Truscott commented, "The crowd adored the man who delivered his fourth-grade-level history lesson in robotic, singsong cadences..."

Other nations who put on gigantic displays of their clout to impress their people are no doubt marveling over the fact that what Trump did was "the cheapest, lamest, most pathetic display of military might ever put on. It was Trump’s. He was all that mattered." Pathetic. And Salon had a recommendation for the Dems...

"The Democratic candidates for president should get tapes of Trump’s 'Salute to America' and make watching it mandatory within their campaign operations. Trump’s speech sounded like it had been written by the 'creatives' at Hallmark, and that was the point."


"We are not the country we like to think we are. Trump won in 2016. 'Make America Great Again' carried the day for him. His 'basket of deplorables' turned out for him. They can do it again."

And that is a challenge that should convince every Progressive/liberal to make their way to the polls early in 2020.
at July 10, 2019