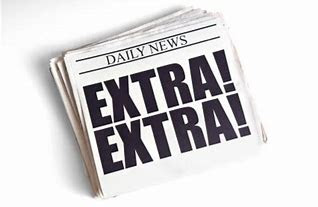 Here's the latest...Paula White, Donald Trump’s religious adviser, and on the White House payroll paid with taxpayer money, just returned from Heaven where she was lucky enough to get an audience with God. No, not her boss, the Trump god, but the real one upstairs. Here's the scenario...

““My spirit went up, and I literally went to the throne room of God. I won’t say much, but I’ll say something that’s important for me to teach you here today. So in that divine encounter, I don’t know how long I was there, I just know that kind of power is almost impossible for a natural body to contain. And as I went to the throne room of God, first I saw there was a mist that was coming off the water, and I went to the throne of God, and I didn’t see God’s face clearly, but I saw the face of God. It wasn’t a clear, like … I could see your face clearly, but I knew it was the face of God.

“And as God begin [sic], he put a mantle [on me] and it was a very distinct mantle. … There was a mantle, and I saw it very distinctly, the color was like a goldish, it was a yellowish goldish, a little bit different than your scarf, a little bit brighter than your scarf there. And then I saw the Earth for a moment, and he brought me back, and he put me in certain places, one being the White House, one being certain continents. … I didn’t come out of that really until the next morning.”

This noodle-head can't even spell, but the reality of this incident illustrates that one religious psycho is advising another political psycho, the Oval Office lunatic, and the outcome is that they are both way off on another planet. Does it get any more bizarre? Do you realize what the world is saying today about the White House maniac? He listens to some spiritual kook who thinks she went to Heaven, so what keeps her from advising him to just get rid of all those nasty people who make fun of him, like Canada and France? 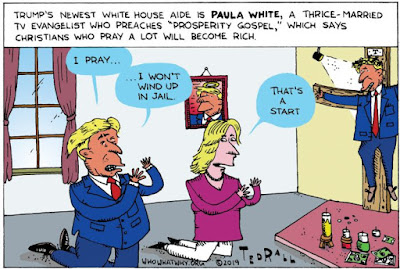 But this phony pious huckster didn't miss the chance to hit her double-digit followers to dump more money into her cash barrel. She "claims one of the key messages in the Bible is that people watching her should send her a month’s worth of their grocery and rent money." It is beyond me how anyone can believe this crap, but it was also unbelievable that Donald Trump won the White House in 2016. But he did, and he brought along whackos like this one and others in the administration.

I watched the above video of Paula White's appeal for money and have seen predators work their skill on prey before, but this carnivore of greed takes the cake. I want to say there is something illegal about it but at the same time, in seeing the video, assume law enforcement would be as confused as me with the conniving collection of rhetoric used. But at the same time, as with her student, T-rump, there is pure genius in the conceiving of people.

Evangelicals worship Donald Trump, with the inference that he, himself, is some kind of god. And Trump has also indicated that he is holier than thou, which I posted back in August of 2019,  "Donald Trump and his new Jesus Christ complex," His then Press Secretary, Sarah Sanders, even said, God wanted Donald Trump, and the UK Independent says, "Donald Trump has promoted a post claiming he is “heaven sent” and suggesting Barack Obama 'kicked' Jesus out of the US in a string of tweets just days after Christmas, 2019.

So, where do we go from here? You almost expect to see T-rump turn Trump Tower into a cathedral, so people can come to New York regularly to worship at his feet. That is, of course, if he willingly leaves Washington after being beaten by Bernie Sanders in November. I am currently just finishing the book by the White House insider, "Anonymous," where the author indicates "Trump 'will not exit quietly,' even if defeated or impeached."

The new administration under the Bern must be very careful in how it handles this situation. There would be nothing worse than the white coats dragging Trump from the Oval Office kicking and screaming for the world to see. This idiot has caused us enough embarrassment as a country than to have a finale like that. I frankly don't have a clue. Does anyone out there have an idea??? Please comment.