Can Michael Bloomberg push Trump over the edge with his campaign ads touting the Oval Office lunatic's business failures? 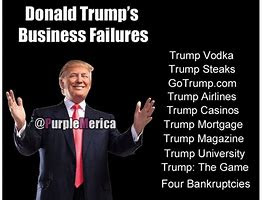 I have spoken in several of my posts how well-known psychiatrists keep coming to the conclusion that Donald Trump is mentally unbalanced to the extent he shouldn't be running this country. These esteemed medical professionals, even though they have not personally examined the Oval Office lunatic, are fully confident their diagnoses are right on target. Their reasoning, there is plenty of his daily bizarre rhetoric in the media to pinpoint T-rump's problems.

Vanity Fair asked the question recently, "WILL NEW IMPEACHMENT EVIDENCE PUSH TRUMP OVER THE EDGE?" It didn't. And now some are even talking about the possibility he has some built in resiliency that is keeping him from the men in the white coats, which many of us have felt would have been at the White House long before now. Maybe Michael Bloomberg has found the answer, a massive ad campaign attacking Trump's business failures.

There are many, as you can see in the above illustration. Hillary Clinton had a similar strategy in 2016 calling out...

"Trump’s tendency toward bankruptcy, highlighting every opportunity Trump had to increase his father’s money for a higher profit. But investment after another failed, as Trump was forced to file for bankruptcy six times for five different companies."

Bloomberg is among the top 10 richest people in the United States. Trump ranks 275th. That alone must piss Trump off every day. The election would be billionaire against quasi billionaire. Here's the scenario...

"Thus far, Bloomberg’s challenges to Trump has prompted Twitter meltdowns, rally rants and name-calling in interviews. If Bloomberg manages to take Trump down, mentally and emotionally, with ads targeting the president’s failed businesses and inability to make the 'deals' he promised, it could prompt the next level of a knockdown drag-out fight."

Vanity Fair also says Bloomberg's tactics are working when Trump reduces himself, again, to use the nicknaming insult, calling the former New York city Mayor, “little Michael Bloomberg,” instead of countering with issues of substance. And that is the big problem in this matter, Donald Trump has no substance...zero, zilch, nada. To depict just how close the White House maniac is to the brink, on February 6, RawStory posted this headline:

Here is one of his off-the-wall comments that seems to confirm the psychiatrists' belief that Donald Trump is coming off the spool...


"Trump says that Rep. Steve Scalise’s (R-LA) wife really loves him because she was visibly upset after he got shot."

What the hell has this to do with the subject at hand??? But RawStory sort of clarifies...


"For unexplained reasons, the president gave a recap of the 2017 shooting at a congressional softball game practice that put Scalise in the hospital. Trump said he was impressed at how emotional his wife, Jennifer Scalise, got when visiting him in the hospital."

That's all well and good, but who gives a shit. Especially considering it is the lowlife Steve Scalise. There's more you can read in this article mentioning Nancy Pelosi, Adam Schiff and a jab at Mitt Romney and his Mormon religion. And I have to mention here that during all of the ranting and raving, congressional Republicans were cheering this idiot along. Beyond pathetic!