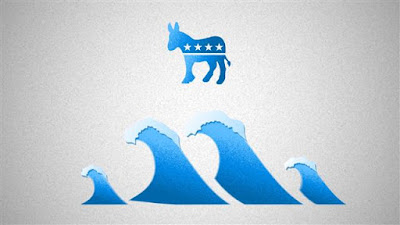 How long have the Progressives sat on their butts when it was time to come out and vote to support their party? At least as far back as Barack Obama, and then for several years before. That's why we are currently saddled with a GOP Senate, and having just won back the House. I call them apathetics, those who hug the couch when it comes time to do their duty. But they may be waking up. In a recent extensive poll by Reuters they found...

"that interest in voting in 2020 is surging in urban areas dominated by Democrats faster than in Trump-supporting rural areas."

There's more in this AlterNet article...


"voters’ interest in going to the polls appears to be growing faster among those who disapprove of Trump than among those who approve of him. The advantage in urban political engagement extends deep into the most competitive battleground states that Trump won by razor-thin margins four years ago.”

Would anyone be surprised? Probably not, but it's comforting to see it in print with solid facts to back it up. The left is finally completely fed up with Donald Trump and his corrupt administration with the urban areas coming alive with Progressives committing all across the country. Nicholas Valentino, a political scientist at the University of Michigan commented...


“Democrats are very angry. Many see this administration as an existential threat to the constitutional order. They’re standing ready to participate to try to change the course of this country.”

One of the biggest issues for the November election could be health care, more likely than not, and although the Oval Office lunatic trumpets his support for this issue...


"the Trump Administration is very much on board with a Republican lawsuit that seeks to abolish the protections of the Affordable Care Act of 2010, a.k.a. Obamacare — including coverage of preexisting conditions — and rip health insurance away from millions of Americans by arguing that the law is unconstitutional."

According to journalist Daniel McGraw, this could be a major obstacle for T-rump who needs the rust belt this November, and where polls are reporting his loss of support in this region. Without this area, the White House maniac is probably dead meat. Bill Kristol, a very right conservative, and Charlie Sykes founded the Bulwark in late 2018, a "passionately anti-Trump" organization. But they are in favor of Obamacare. Go figure.

“One question in the poll was especially relevant to health care, and unlike the questions in most previous national polls, phrased very directly: ‘Do you approve or disapprove of the way Donald Trump is handling health care policy?’ The results show Trump and the Republicans have a big problem in these key states.”

Many of the pundits aren't giving Bernie Sanders much of a chance against Donald Trump, although he holds a commanding lead in the Democratic Primary. My gut tells me with a 70% U.S. approval rate for Medicare for All, there are more supporters for the Bern than we think.
at February 20, 2020