David Faris' book, "It's Time to Fight Dirty," is dynamite 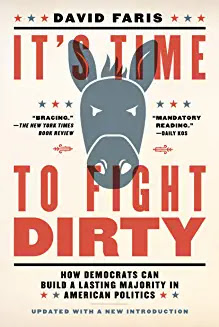 David Faris' book, "It's Time To Fight Dirty" was recommended to me by Facebook pal, Neil Schneider, and it would be the understatement of the year to say, it is scary. Since I have followed the political scene with my blog for the last several years, I am aware what is going on in everyday politics. I knew the GOP was defrauding and deceiving the left at every turn, but Faris points out how the Republicans were able to set up such intricate strategy, right under the noses of Democrats. It is beyond pathetic.

He starts right off with the concept of "originalism." a belief that the Constitution must be interpreted just as it is, not veering to the left or right with its doctrine, but just what it says. Comparable to fundamentalists in their interpretation of the bible. The late SCOTUS justice Antonin Scalia was one of the most forceful modern advocates for originalism, and this is where gun nuts take their lead when it comes to the defense of the 2nd Amendment.

University of Chicago law professor William Baude comments that originalists believe "that the words in the Constitution have the same meaning over time, even if modern circumstances change, and even if we wish the words meant something else." If Scalia had had his way, same-sex marriage would have still been illegal, and we would not have certain portions of the Affordable Care Act, according to the New Yorker.

Originalism crops up throughout the Republican ideology, which you will see as I continue to review this great book, "It's Time To Fight Dirty."
at February 01, 2020