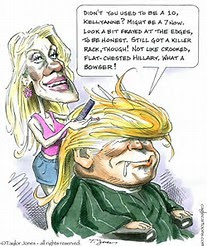 It was 2AM in the White House when Donald Trump emerged from the Oval Office, smartphone held high, screaming that there was a fire, when he ran into Kellyanne Conway stalking Steve Bannon. She thought he was NBC's Chuck Todd. KC said, "What the hell are you talking about? Where?"

"Right here on my phone you idiot, and you are one of the main reasons."

"If you keep hurting my feelings, I'll go on TV and tell everyone your gardener does your hair."

He thought about that for a minute and decided to change the subject. "KC, they're getting way too close to the truth about my connections to Russia, and you know how much I hate the truth. By the way, have you ever told the truth?"

She thought so long that Donald John went on. "When I told my campaign to get in touch with Russian officials about Hillary and the Democratic National Committee, they told me no one would ever know. The question now is how to hang them out to dry and get me off the hook. If you can ace that, I'll put you in charge of Steve Bannon."

"Goody, goody," was the reply, and she immediately tweeted, 'White House learns that it was Jared Kushner who set up contacts with Russia to do the hacking and is the close friend of Vladimir Putin.' She looked at her phone satisfied that she was still able to lie like the pro she was. 'Two birds with one stone." Then, "That'll teach him to try and keep me out of the White House.