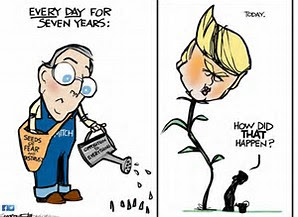 A one word definition of derangement is "insanity," something that most certainly applies to new President, Donald Trump, and his entire administration. Muttonhead McConnell said of Donald John, "...what I am a fan of is what he's been actually doing." Let's see what that is...


Starting at the inauguration, with clear evidence to the contrary, Trump exclaimed he had largest inauguration crowd ever. The President lied.

Then, he sent spokesman, Sean Spicer, in front of the public to reiterate his lie of inauguration crowd size. The President's spokesman lied.

Put the country's business on the back burner while he raised hell with Nordstrom for dropping his daughter, Ivankas's, clothes line.

Continuing a war against the media that not only he can't win, but one that displays his buffoonery to the world, making America the laughingstock.

Talks and writes like a three-year-old, something that has rubbed off on his staff and is available, when he tweets, which he does incessantly, to the entire world.

Lets Kellyanne Conway talk, and talk, and talk to the public saying nothing of substance and lying more than Donald John, if that is possible.

I was born in Kentucky, but am frankly ashamed of that fact since mealy mouthed McConnell represents the state. I was in Paducah recently with my wife and the mention of his name brought only looks of scorn. So who the hell voted for him? The same people who voted for Trump, those with the standards of an imbecile.