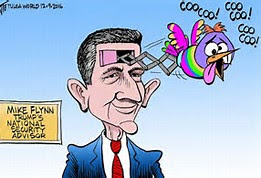 The two of them were sitting in the White House Situation Room located in the basement of the West Wing. President Donald Trump and national security adviser ­Michael Flynn, sitting across the table from each other, just staring.

Donald John: What the hell are we doing here, Mike?

Flynn: Your greatness, I've heard so much about this place, I just had to see it.

Donald John: Jesus Christ, you pulled me out of my Oval Office just for that. I was busy talking to the White House designer about a new gold inlaid rug to replace that thing with a design on it.

Flynn: But that's your official seal of President of the United States.

Donald John: Mike, don't need that. I know I'm the most powerful person in the world now. What the hell's wrong with you, everyone knows that.

Flynn: Okay, then why don't we talk about starting a war while we're here. You already put sanctions on Iran for doing those nuclear tests. Let me take a few good men, sneak into the country, and bomb a Tehran night club. Then I can go right over to the Tehran News, take credit for it in the name of the United State and, bingo, we've got a war.

Donald John: Sounds good to me but, Mike, how do you plan to get out of Iran then?

Flynn: Your illustriousness, you will then wage the global war I have always dreamed of and rescue me.