Political Satire: 33 Days of lies/misinformation from the White House 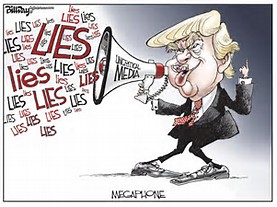 Have you wondered, will Donald Trump ever get through one day without telling a lie or spewing misleading information? It is doubtful since his first 33 days in office have been fraught with a complete distortion of the facts. But with no remorse. That's the new President of the United States, a gift bestowed on us by a bunch of uneducated, racist, religious nuts. This group probably has a problem with the truth since they are completely removed from reality. And the real problem is that these poor souls still think this lunatic is doing the right thing.

Here's more, and it might be the most alarming; a conservative news service reported that 45% of Donald John's followers trust his administration more than the news media. No doubt the same conglomeration as those covered above. The Washington Post's lead fact-checker, Glenn Kessler, said...


“There’s never been a presidential candidate like Donald Trump — someone so cavalier about the facts and so unwilling to ever admit error, even in the face of overwhelming evidence.”

Yet, the American public just complacently sits back, when there should be an outcry demanding that this maniac either resign or be impeached. But, of course, there is still a blockhead Congress to deal with. What we need is a new visionary from the Progressive ranks to lead the fight. Actually, we had one, and he is the person who should be in the White House now.