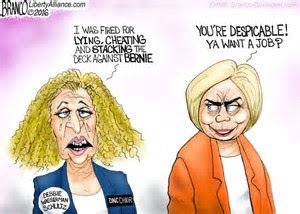 Debbie Wasserman Schultz was sitting in her Sunrise, Florida, office thinking about how she could revive her political career by switching to the Republican Party and becoming Donald Trump's Secretary of Holocaust Education. At least it would be a Cabinet post after she was deprived of her DNC chair. That brought back memories of how she had led her staff through the arduous task of disparaging Bernie Sanders with emails and word of mouth so Hillary Clinton would win the Primary. She did but was beaten by Donald Trump in the 2016 Election. Then she got caught.

Wasserman Schultz couldn't understand why the Democrats were so pissed. During her tenure as the DNC Chairman, they had lost only 10.2% of the Senate, 19.3% of the House, 20.3% of State Legislatures and 35.7% of Governors' offices. But, it might've been worse. Hell, Joni Ernst could have been elected President. Hey, if I had switched Parties, she might have chosen me for Vice President, she thought. And then looking at a mirror she took from her purse, she said to herself, 'Maybe it's my hair.' Then the phone rang and she had to pick it up since everyone else was gone.

On the other end, "I want my campaign data back."

To which she replied, "C'mon, Bernie, you know I can't do that. Besides, Hillary still has it...whoops!"