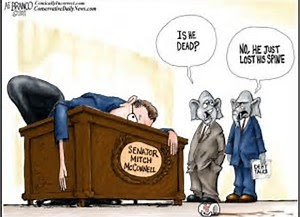 There are several terms used for Mitch McConnell, the most disliked member of the U.S. Senate, but "condescending prick" in The Daily Banter is perhaps one of the best. My favorite is asshole, which is described in the dictionary as, a stupid, mean, or contemptable person. That certainly works for me. But get this, in Kentucky, Rand Paul, the state's other Senator, has an approval rank of 51%, McConnell only 40%. Even Breitbart, an alt-right publication, says he is the most unpopular U.S. Senator with a 52% disapproval rating, only 38% approve. The man is a disgrace to this country.

The Daily Banter is referring to his bitching and moaning over protests against Donald Trump that are holding up Senate business, when this jerk brought Senate business to a complete halt during the Obama administration, just because it was Barack Obama. I have always said this also included racial overtones, a characteristic McConnell has been accused of before. The downside of all this with Donald John in the White House, it is a two-barrel crisis since the former will no doubt rubber-stamp most everything McConnell does. One can only hope the American public wake up before 2018.