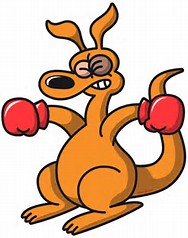 You know, you would think that even a mentally challenged President would know which side his toast is burned on. There are world leaders who have always hated the United States and make sure we know this by their actions, Australia isn't one of the latter, but may soon become one after Donald John kicked their Prime Minister in the balls several times by phone. Donald Trump doesn't want 1,250 refugees from their detention centers, agreed on by former President Obama. If Obama made this agreement, there must have been a good humanitarian reason.

Later that day Australia's PM Malcolm Turnbull, called Mexico's President Enrique Peña Nieto, who had also fought with the new monarch over a wall between the U.S. and Mexico. They agreed that Turnbull would supply Peña Nieto with several hundred kangaroos, enough that there would be one about every one-hundred feet. They would fight off all Mexican workers going into the U.S., cutting off America's labor force in the fields, restaurants, gardening, housecleaning and more. Turnbull welcomed these workers to Australia's thriving economy.

It was only two months later. All fast food businesses had shut down in the U.S. There were no landscape centers. The fields were overgrown with unpicked crops. Trash was piling up everywhere. The U.S. economy was spiraling down. From the White House Donald John sat back in his Oval Office chair and tweeted, 'Tie me kangaroo down sport, tie me kangaroo down.' Mike Pence clapped dutifully.