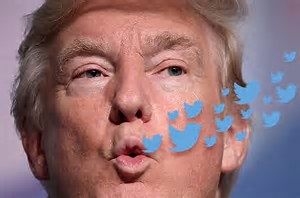 It was 2 AM at the White house but the new U.S. sovereign was still awake with smart phone in hand tuned to Twitter. Melania had finally decided to move to the Lincoln bedroom to get some sleep. But Donald Trump had decided to challenge Vladimir Putin to a game of 'World Leader Psychopaths,' where you challenge each other to see who can be the biggest nutcase leading a country. The two had been playing this for years and Putin agreed that if Donald John ever won a game (he hadn't)) he could build as many luxury hotels in Moscow as he wanted.

It was 10 AM in Russia's capital city and Vlad was busy in his office admiring the Putin coffee mug he was drinking from as his smartphone rang on Twitter. "Hello Big D," it was obvious who it was. "How's it hangin'?" He often wondered how Donald John had time to stay on Twitter all night when he had such a gorgeous wife.

"Okay, Vlad, it's time for our regular game of World Leader Psychopaths and tonight I'm going to beat your ass."

"First of all, it's not night here, and second, I'm tired of playing games with you."

"What the hell do you mean? This is a tradition and we have to play. Nobody else here will play games with me."

"I'm bored with the game and since you've lost every time so far, it's pretty obvious you are the world's leading psychopathic leader."

"What the hell, you're calling me a psychopath?"

"Why not, that's what all of your countrymen call you."

And then the Twitter line went silent and stayed that way for several minutes. All of a sudden Vlad cried out, "Holy shit," and went racing down the hall of the Kremlin with the phone in his hand, still on Twitter. As he entered the special security room and headed for the launch console, he heard an alert from Twitter.

"Too late, Vlad, I already hit the button."