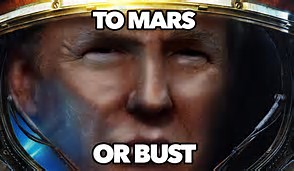 A NASA astronaut was asked if we should take the opportunity to colonize Mars. He said, "Nope." Ron Garan said this recently so it isn't like it was before Donald Trump was elected. Or maybe he is a supporter of Donald John. Probably not when you consider his letter to the new U.S. emperor. But I would like to propose a compromise to the idea. Establish a temporary haven for the anti-Trump folks, something like a Disneyland on Mars; they're everywhere else. Maybe even let Trump build it with, of course, staunch oversight.

Once Richard Branson has the kinks worked out of Virgin Galactic, he can start taking reservations and with the millions of takers, Branson should be able to reduce his fare of $250,000 a trip down to the typical cost of an airline ticket cross-country. It's only provisional accommodations, of course, and once Donald John is impeached or implodes and resigns, a happy group of anti-Trump devotees can return to earth and begin the process of getting rid of Mike Pence and the entire Republican Party. The last part will be the hardest but certainly the most fulfilling.