Political Satire: Trump Executive Order for Nordstrom to do what?


Donald Trump was working late in the Oval Office on a secret Executive Order that had him fired up and obviously something he was indignant about. All the doors were locked and he wouldn't even acknowledge the Secret Service agent checking on him. Go away, he boomed, and returned to work on the order. It was 2 AM and he had just tweeted that Bernie Sanders just announced that he had switched his allegiance to the Republican Party backing its new CEO. He liked that title rather than party head. He had labeled his tweet Alternative News just in case. 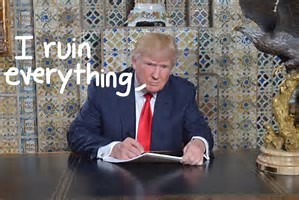 By 3 Am he had finished his work and decided to turn in. On his way to the master bedroom, he passed Melania coming out of the Lincoln bedroom on her way to the kitchen for some warm milk. Donald John continued on, stopping momentarily at his secretary's office to drop off his rough draft of the Executive Order. The next morning, he finally showed up close to noon. His secretary came into the Oval Office and placed the EO on his desk and, turning, returned to her office shaking her head. "Now, that'll teach those losers," he said.

That morning's Washington Post (yes, already leaked) had a spread on the front page:


"Donald Trump issues Executive Order to Nordstrom's Dept. Store to reinstate his daughter, Ivanka Trump's line of clothes. Failure to comply immediately will result in a 20% Trump tax on everything else sold in the store. Nordstrom did not reply for a request for comments."