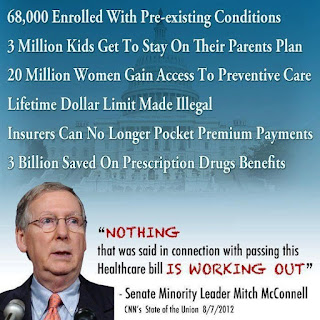 Elaine Chou had just been approved as Donald Trump's Transportation Secretary and her husband, Mitch McConnell was elated; along with a GOP Congress and a new figurehead in the White House he was sure he could control. Yes, Donald John was elected to the office but McConnell knew he was the real savior of the Republican Party now. He had never had this kind of power, and was just glad that he had found his source of long term stamina in the last few years to keep him going. It was the only way he had had the drive to fight against Barack Obama's second term. Damn those blacks.

McConnell grabbed his bottle of Mexican vitamins and took two; the dosage was six a day. God forbid anything happen to the doctor in Mexico City who supplied him. Heading back to the Senate chamber, his cell phone rang and it was doctor Gonzales who was excited, exclaiming that he wouldn't be able to supply the Senator any longer with his precious supplement.

"What do you mean? I pay you a fortune for the capsules. Do you need more money? I can always call the Koch brothers for a loan."

"No, no, something called Obamacare. Federales just raided my shop and took everything. I am ruined and all because of you."

"What did I do," he was desperate now.

"The Mexican President is a good friend of Barack Obama and when he found out what I was doing, he had me raided."

McConnell knew he would waste away and be unable to fulfill his duties of Majority Leader without his beloved Mexican vitamins. Even his wife didn't know. "Just sit tight. I'll take of this."

As he strode onto the Senate floor, he approached the podium and called for order. "Ladies and gentlemen of the Senate." Only a handful were there, all Democrats. "After a long discussion with my staff, I have decided that this body will vote to continue Obamacare, and I would heartily recommend to Speaker Ryan that the House do the same." Obamacare was kept by both houses.

That night he heard the sound of a text on his phone and when he checked, former President Obama said, "Now we're even. Any more of your crap and I'll tell Elaine."