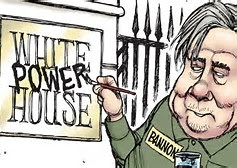 White nationalism or white supremacy is the belief that white people are superior to those of all other races, especially the black race, and should therefore dominate society. It's hard to believe this kind of concept could persist in the 21st century. Don't get me wrong, it has been prevalent over the years since the Civil Rights Act of 1968 also known as the Fair Housing Act. There were others before it but Lyndon Johnson thought he was putting on the final touches with his late sixties bill. Although there was some noticeable breakthrough, racism in its purest form still exists.

What we never thought possible in this country is the fact that, even though there have been racists presidents before him, no other administration has ever prided itself in stocking its staff, even its cabinet, with white nationalists. Donald Trump not only welcomes their company, he encourages their participation in the sport by regularly practicing his own. It's like who can one up the other. As Salon's headline expressed...

Further: "Donald Trump’s administration is built around a brain trust of white nationalists." Folks, these crackpots are all proud of a trait that normal, civilized people consider abhorrent. In addition to the above, Donald John's new Atty. General, Jeff Sessions, has been a racist most of his adult life. And according to the Washington Post, half of Trump supporters are racists, proving my earlier point that racism has been prevalent over the years, in spite of targeted legislation. We are a truly pathetic nation that allows these lowlifes not only to exist, but also to proliferate.

Said it once and here it is again, "How about concentration camps for racists?" my headline from an earlier post. May sound far-fetched but wouldn't it be fun to visit their compound and flip them the bird through the chain-link fence...with barb-wire around the top, of course.