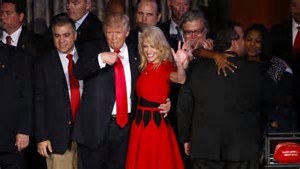 The whip was concealed in her purse but everyone she passed in the hallway could see the fire in her eyes with the complete determination that was written on her face. Kellyanne Conway was on a mission and she would let nothing stand in her way. Just outside the Oval Office, she told the staff, including Vice President Pence who was waiting, 'no one enters until I am done.' She went in without knocking and locked the door behind her. Walking over to the great ruler's desk, she took the whip from her purse, threw it in front of Donald Trump and said, "See this, hope I don't have to use it."

"What the hell do you mean walking in here like..."

"Don't give me that shit, Donald John, I got you elected and I can get you un-elected, unless you change your ways."

DJ was at a loss for words for a few minutes until regaining his composure. "I could fire you for something like this."

"You could but you won't. What I know about you would fill three extra editions of the Washington Post. Now listen to me. I'm tired of you putting out all this bullshit and then I have to explain it. Makes me look like a dumb shit."

"Hold on a minute, need to tweet something on Jeff Sessions confirmation."

"No freakin' way until I approve it; all of those go through me from now on."

"No way," said a cranky but cowering DJ, and then he pushed back from his desk and started to get up.

As he did, KC yanked the whip up from his desk, cracking it just in front of DJ's nose. "Sit, she commanded," and he did. "From now on I'm running things around here. You sit in the chair but I give the orders. This country wanted a female president, well now they've got one." She rolled the whip up, put it back in her purse, and walked out of the Oval Office.

After KC had closed the door, DJ pulled out his smartphone and dialed a number. "Hey 'Fat Tony,' remember that favor you owe me?"