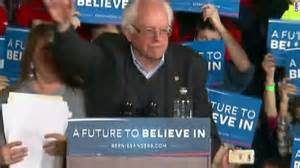 This endorsement confirms with no doubt who the Progressive candidate is in the Democratic primary, placing Bernie Sanders in the position of being the people's candidate. If you're not sure what that means, it indicates the only one running for President who wants to put the middle class and the disadvantaged before the wealthy and big corporations.

It is an endorsement that Bernie can take to the bank. The Nation has endorsed Democratic candidates only twice. Jesse Jackson in 1988 and Barack Obama in 2008.