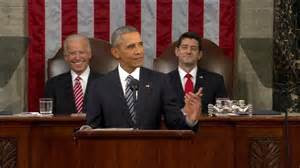 Barack Obama closed the last year of his Presidency with an excellent SOTU speech that reverberated through all the accomplishments of his seven years and the conflict that he has experienced with the GOP Congress in opposing almost everything he has proposed. No hostility, just hard facts that should put Republicans on notice that this will probably gain momentum with the new Democratic President in January 2017.

He did not identify who the next President will be but he indicated the United States is now on a course of Progressivism, one that is supported by the American public, and one that must be advanced in the future. Obama also touched on some topics he felt were priorities for this country that have been championed by Bernie Sanders for the last 30 years and are major thrusts of his campaign for President.


The income and wealth inequality, something Joe Biden praised him for saying this was new territory for Hillary Clinton. Getting big money out of politics. Establishing a living wage, increasing the minimum to $15.00 per hour. Creating decent paying jobs. Strengthening and expanding Social Security, to name only a few. Clinton has picked up on many of these issues, attempting to make them her ideas. But the voting public is beginning to get wise, as they become more familiar with the Senator from Vermont.

President Obama has said he won't endorse one of the Democratic candidates. After tonight's SOTU, it won't be necessary.
at January 13, 2016