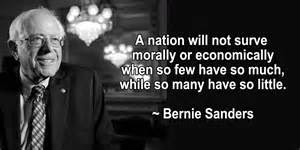 Hillary Clinton is leading Bernie Sanders 47% to 28% but Bernie's surge is significant in that Clinton led 67% to 31% last December 17, which totaled 36 points at the time. Phil Noble, President of the So. Carolina New Democrats says the Clinton lead still worthy but Sanders is "closing fast." The Democratic SC Primary is February 27. Here are some more figures from Phil Noble:


Among key subgroups, the results of the poll were as follows:

"We believe this poll gives a good snapshot of the state of the race in South Carolina today," said John Thevos, Research Director of SC New Democrats who managed the survey. "Most of all, it shows that things can change very quickly in the Palmetto State and the primary on February 27 could well surprise lots of folks."

A couple of months ago So. Carolina was all gloom and doom for Bernie Sanders since it was assumed that Hillary Clinton had locked up the African American vote. Now it is obvious that the state as a whole is rethinking its loyalties. It is simply a matter of recognition of the candidate and his issues and it is obvious that once folks learn what the Bern is all about they begin to feel it.
at January 19, 2016