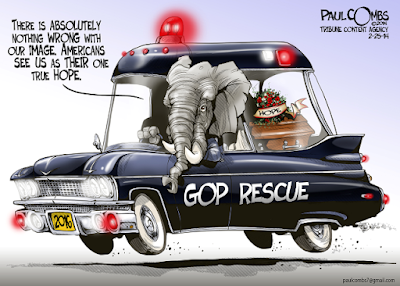 More than 8 million people signed up for coverage via the federal HealthCare.gov health insurance exchange marketplace as of Saturday, Dec. 19, 2015, according to Health and Human Services Secretary Sylvia Burwell on MSNBC. She added, "Today, we have more sign-ups, more new enrollees and a younger population than we did last year.” Didn't Pres. Obama caution that we must give the healthcare act time and the young people would begin to participate?

Our new esteemed House Speaker, Paul Ryan (R-Wis.), was quoted at the same time on "Meet the Press," "It’s a law {ACA} that is not working.” So much for improving the new Speaker's intelligence over Boehner and working across the aisle.

If that wasn't enough, yesterday "The House voted almost entirely along party-lines, 240 to 181, to repeal the Affordable Care Act and defund Planned Parenthood." Obama has already said he was going to veto any of this Republican bullshit, which makes it perfectly clear to me what a mockery the GOP is and has been making of the Congress in pursuing their stupid ideology. It's a proven fact that the more the public knows about the ACA, the more they approve of it.

It is also obvious that much of the original and ongoing disapproval of ACA is due to Republican negative advertising and promotion since its inception in 2010, much of which was and continues to be totally untrue. It's all a matter of whether or not we want to provide coverage for every citizen of the U.S., some who can't afford it, like many of the industrialized countries in the world. Or do we continue to let the covetous, greedy Republican population keep America in the dark ages?

It's pretty much your decision when you go to the polls in November.