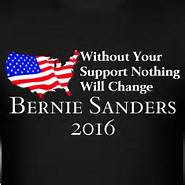 Just today it was reported on MSNBC that "Obama doesn’t see Clinton vs. Sanders as a repeat of 2008." He goes on to confirm that Hillary Clinton is establishment and Bernie Sanders is, well, too focused on one thing. Admittedly, Bernie started his campaign and has continued to emphasize America's inequality, but under that heading falls all of issues also being promoted by Clinton:

There are more but the above shows just how close the two campaigns really are. It doesn't point out, however, the differences which make Bernie Sanders the choice of voters who want real change. Like in 2008. Bernie wants a $15 minimum wage, Hillary only $12. Bernie wants honest, single-pay universal health care, Hillary satisfied with Obamacare. Bernie wants to control the wealthy and Wall Street, Hillary is a part of it. There's even more.

Hillary thinks that we must work within the framework of the current political system, Bernie wants a revolution to change that and do away with the current disruptive government. Hillary wants to modify the educational system, Bernie wants to change it to free education for all. Hillary not clear on how she'll pay for her proposals, Bernie will tax the wealthy, large corporations and Wall Street. The last is perhaps the most significant in the separation between the two candidates.

President Obama, along with the rest of the Democratic establishment, is protecting the party favorite over the Independent candidate. Bernie Sanders will finally put this kind of thinking to rest.