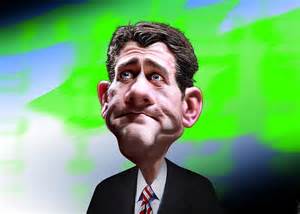 MSNBC says the Beltway "considers Paul Ryan some kind of numbers-wiz policy wonk," even though his 2014 budget that passed the House was considered "voodoo economics." But Steve Benen says, :...his answer yesterday was a reminder that the Wisconsin congressman really doesn’t know what he’s talking about." Benen refers to Ryan's attempt to explain the success of the Obama-era economy.

It's almost like the new Speaker lives in a dream world of his own and, unfortunately,  he is only two heart beats away from the Presidency. Here's Ryan's "gibberish," as Benen refers to it:

Paul Ryan is obsessed with rewarding the wealthy at the expense of the working class and the needy. Bernie Sanders will remedy that when his Presidency sweeps out the House GOP majority and replaces it with Progressives.
at January 14, 2016