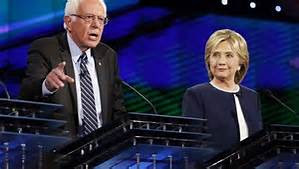 Guess how old Ronald Reagan was when he was elected to office: he was 69. Bernie Sanders is just 74, five years older, and in good health, but it is reported that the Clinton campaign plans to attack Bernie on his age, perhaps even in the debate tonight. If this happens, it will be one of the low blows of the campaign, and hopefully Bernie will respond with his usual emphasis on the issues, showing Hillary's desperation in losing ground.

And then there are all the skeletons in Clinton's closet like Benghazi and the Emails that the Bern has elected not to pursue. Bernie Sanders has stayed on issue during this campaign just as he has in the 34 years he has been in political office. Hillary Clinton has flip-flopped on same sex marriage, gun control, the Iraq War and drivers licenses for illegal immigrants.

Okay, it's four to one; Bernie just flip flopped on his support for a bill that gave legal immunity to gun manufactures, now promising to back one that strips them of this immunity. But any way you cut it, there is more consistency in Bernie Sanders than Hillary Clinton. And you can depend on this consistency in his Presidency because he has no obligations to big donors, big business and those represented by Clinton's PACs.